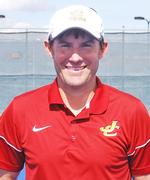 Brooks Buffington enters his fifth season as head coach of the Jones men's and women’s tennis programs in 2021.

The Bobcat men were 15-5 in 2019, ranked 20th nationally and boasted a 3.14 team GPA with a 100% graduation rate. Noel Monsalve was a conference champion in No. 2 singles and was named the ITA JUCO Region 3 Most Improved Sophomore Player of the Year.

In 2018, his second season, he led the Jones women to a 15-3 overall record, MACJC/Region 23 Tournament championship and a tie for 13th in the NJCAA Division I National Tournament – the highest finish ever for Jones tennis team in Division I. The Lady Bobcats had a 3.70 team GPA, second-highest in the MACJC and third highest in the nation to earn NJCAA Honorable Mention Academic Team of the Year honors.

Prior to Jones, Buffington was a tennis paraprofessional coach for six years at Northwest Rankin High School, spent four seasons at Hartfield Academy as head coach and was a three-year head tennis pro at Reservoir YMCA. He was also the head tennis pro at Castlewoods Country Club from 2007-2014.

Buffington played collegiately at Jones during the 2003-04 seasons and finished his career at Mississippi College. He's been playing in the USTA League since 2007 and his team won the 2013 USTA 4.5 Adult League National Championship. For the past five years, Buffington has been a USTA NTRP 5.0 Player.

He's been a USTA official since 2007 and an elite professional since 2008.