Wes Thigpen returns to Jones College after a two-year hiatus, this time as the 16th head baseball coach of the Bobcats.

The Luling, Louisiana, native spent the past two seasons as the head coach at rival Mississippi Gulf Coast.

After Thigpen's first season was cut short due to CoVID-19, the Bulldogs finished the 2021 regular season 20-19 and advanced to the postseason.

Thigpen has an impressive track record as a pitching coach and recruiter following a playing career that reached the professional level.

In his first stint in 2017-19 as the Bobcats' pitching coach and recruiting coordinator, Jones was 127-21 (.818) with an MACCC title and two regular-season runner-up finishes. His staff finished all three seasons in the Top 10 in ERA in NJCAA Division II, including the 2017 squad which finished second with an eye-popping 2.74 ERA.

Under Thigpen's guidance, two pitchers have earned NJCAA All-American honors. Will Freeman, who signed with Alabama, was picked by the San Diego Padres in the 2018 MLB Draft

Thigpen spent the 2016 season as the pitching coach at Hinds, where all four sophomore pitchers signed to play NCAA Division I.

Thigpen was introduced to the MACCC in 2008 as a catcher at Meridian Community College. He started in 99 career games for the Eagles, helping them to a conference title as a freshman and region championship and NJCAA World Series berth as a sophomore.

After two all-conference seasons and an all-region sophomore campaign, Thigpen became a two-year starter at Mississippi State where he was a member of the SEC Academic Honor Roll and helped the Bulldogs to a Super Regional appearance as a senior in 2011.

While at Mississippi State as a graduate assistant in 2014-15, he was also able to work closely with widely respected pitching coach Butch Thompson, now the head coach at Auburn University. Thigpen was also able to catch or coach numerous professional and eventual MLB pitchers between his time in the SEC and in pro ball.

Thigpen would then enter the professional playing ranks with the Detroit Tigers organization in June 2011. He advanced all the way to the Double-A level in just his second season in 2012 before ending his playing career at the end of the 2012 summer to complete his education.

He is married to the former Holly Head of Vicksburg. They have a four-year-old son, Maddox, and a newborn daughter, Emrie.

Former Bobcat and national champion Jonathan Parker returns to his alma mater as an assistant coach on Wes Thigpen's staff.

Parker spent the past two seasons at Mississippi Gulf Coast to start his coaching career.

The New Orleans native was a two-year team captain and catcher at Jones during the 2016-17 seasons, helping the Bobcats to a combined 100-13 record, their first NJCAA Division II National Championship (2016) and an MACCC Championship (2017).

Parker was named team MVP as a freshman and was also an all-tournament team nod at the national championship after going 9-for-19 with a pair of RBIs and seven runs scored.

Parker went on to start 16 games at Louisiana Tech as a junior before ending his career at Southeastern Louisiana. He graduated with a bachelor's in general studies with a minor in business and marketing.

Parker is a graduate of Brother Martin High School, where he was a four-year letterman and two-year team captain on the baseball team. He also earned three letters on the football team, where he was also twice a team captain. Parker earned all-district honors twice and won The Clarion-Herald Linebacker Award in the New Orleans Catholic League. 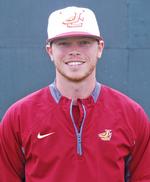 Former Jones College baseball graduate assistant coach Myles Gentry has returned to his old team for a second stint with the Bobcats.

"I'm humbled and honored for the opportunity to be back as the pitching coach at Jones College," Gentry said. "I have great respect for coach (Wes) Thigpen and look forward to coaching with him again. I'm really excited about the talent we have at Jones and can't wait to get to work."

Gentry has pitched in the SEC, the Cape Cod League and on the biggest stage in Omaha at the College World Series. Those experiences have created a wealth of knowledge for him to influence student-athletes in a very positive way.

The Gulfport native spent the past two seasons as the pitching coach at Mississippi 6A high school powerhouse DeSoto Central. The Jaguar pitching staff posted a 3.07 ERA with 265 strikeouts last season and pitched DCHS into the MHSAA 6A State Quarterfinals.

Gentry reunites with head coach Wes Thigpen after the two were former assistants together at Jones during the 2018-19 seasons. The pitching staff touted the league's top ERA both seasons, including a 3.62 ERA in 2018, fifth in the NJCAA, and 3.66 ERA in 2019, 10th in the NJCAA.

Gentry originally signed with JCJC out of Gulfport High School before taking an opportunity to play at Mississippi State.

Gentry helped pitch the Bulldogs to the 2013 CWS Finals against UCLA as a freshman, going 4-1 with a 3.69 ERA and 30 strikeouts in 23 relief appearances on the season. He appeared in 48 career games for MSU from 2013-15 before graduating with a degree in kinesiology.

At Gulfport, Gentry earned MAC All-State and ESPNHS All-State honors, in addition to being named to the Biloxi Sun-Herald All-Coast Team and selected to participate in the Crossroads Diamond Club All-Star Game at Trustmark Mark in Pearl. He played summer ball for Marucci out of Baton Rouge, Louisiana, and played with Team Mississippi going into his senior season at Gulfport.